Owner and Founder of the Maui Yoga and Dance Shala

Aloha kekahi i kekahi – Love one another 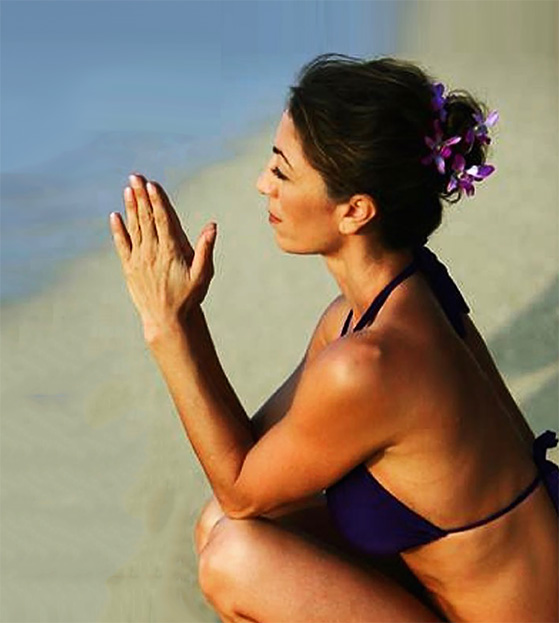 Salutations to my gurus who have inspired and guided me on this beautiful path of yoga.  I bow to you. 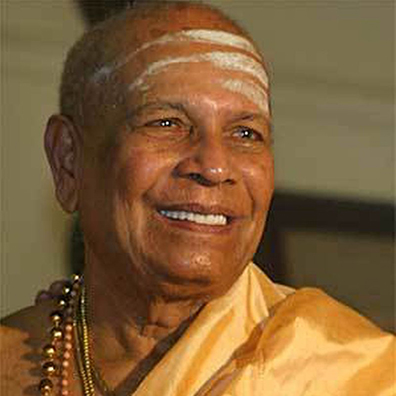 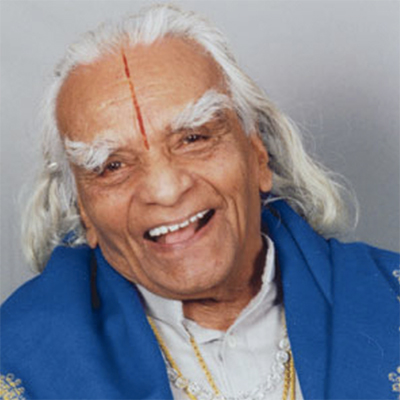 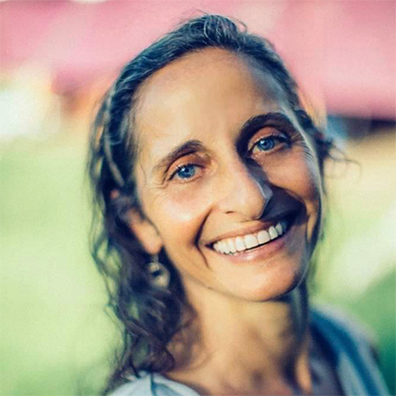 Nadia Toraman’s love for sharing the gift of yoga has given her recognition in the Maui community, and globally with her warm, spirited guidance in the classical as well as modern approaches to the practice. Her Maui Yoga and Dance Shala has provided the transformative experience of yoga, dance, and wellness with a variety of offerings at her location in Paia as well as the popular Island Fresh Cafe, which is also located at the Paia center.Maui Aloha Yoga Nadia’s Maui Aloha Yoga is her own special blend of Aloha Spirit often set to acoustic live music.  She instructs an alignment based yoga that encourages the purifying of body and mind, builds strength and flexibility, develops one pointed concentration, and uplifts the Spirit in a loving, welcoming environment.

Having established the Maui Yoga & Dance Shala 20 years ago, Nadia has worked with great care and devotion to offer a sacred space for locals and visitors alike. With frequent visits from pro-athletes and celebrities, her teacher trainings have produced hundreds of strong, confident yoga teachers, studio owners, star yoginis, and practitioners around the world. Nadia’s teachers include Sri K Pattabhi Jois, the Iyengar family, Maty Ezraty, and more. Her studio hosts some of the top names in the yoga lineage today, and continues to grow and benefit the yoga community world wide.

” Yoga has been life-changing for me. Since the first day, I have always kept with it. And what better place to practice then on the island where the spirit of yoga and the soul of Hawaii have so much in common. The raw, organic feel of nature, the connection between prana and mana, namaste and aloha, all contribute to finding the true self while healing and rejuvenating, and guiding us to deeper levels of awareness. “

” Yoga has been life-changing for me. Since the first day, I have always kept with it. And what better place to practice then on the island where the spirit of yoga and the soul of Hawaii have so much in common. The raw, organic feel of nature, the connection between prana and mana, namaste and aloha, all contribute to finding the true self while healing and rejuvenating, and guiding us to deeper levels of awareness. “ 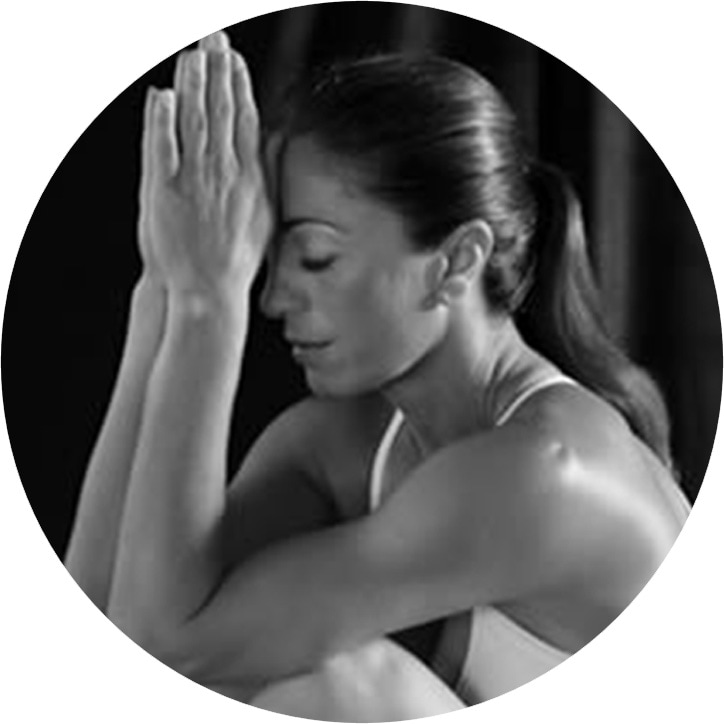 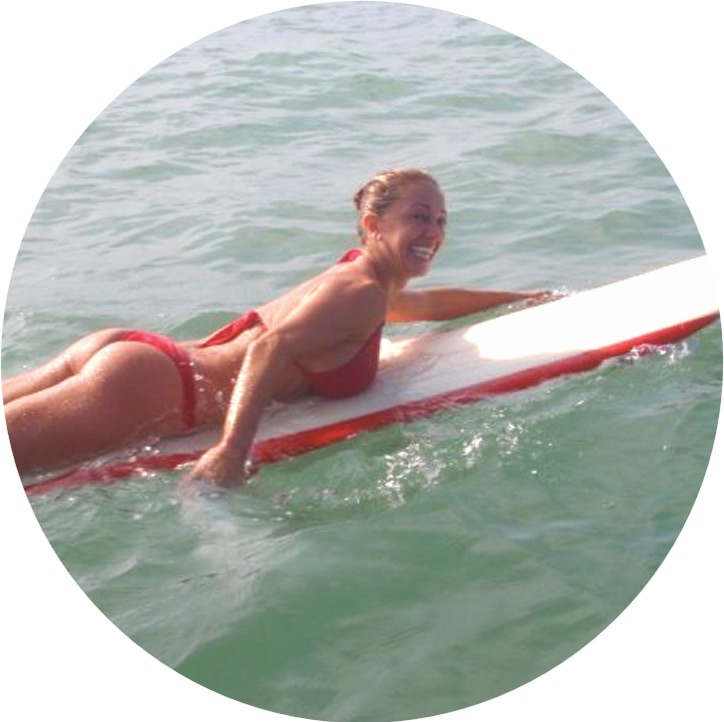 Being completely present in the moment is what ultimately frees the mind of its limitations. Similarly, surrendering oneself into an asana, or pose, one’s body can go into deeper states of relaxation and clear the mind of stress inducing thoughts. Stretching coordinated with breathing elongates the muscles so they relax and absorb blood and oxygen, aiding and preventing injury and illness. Yoga emphasizes optimal alignment of the body, leading to a proper posture that aligns us with gravity and encourages a free flow of fluids and energy. 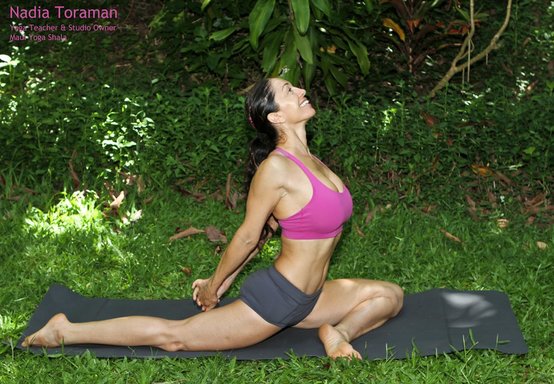 Ultimately the path of yoga can lead us to our higher calling, our dharma, or duty. The practice opens up our whole being and teaches us to trust the Self that resides within the heart giving us a sense of loving awareness and devotion. It then helps us to maintain the state of awareness and open-heartedness in all of life’s situations. Traditionally yoga classes began and end by chanting OM, a Sanskrit word that is said to be the vibration of the universe. Focusing on the breath while cultivating a flexible, strong body and mind, brings us a life healthy, whole, and harmonious, with ever increasing levels of wisdom and vitality.

Dear Nadia, ” You’re such a special teacher and your center is just a treasure on this planet. I’ve studied with many famous yoga teachers in LA …your teachings are something deep, full of integrity, love and you find a way to bring out the best in us, as students and people. And the shakti is a bonus! “– Mark PortmannMark Portmann Music (BMI) 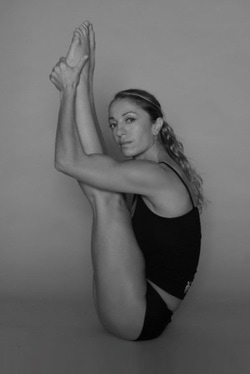 Born May 8, 1969, Nadia Toraman was raised in Eastern Turkey on her family’s Kurdish farm. Her earnest upbringing instilled in her traditional family values such as the importance of working hard in order to achieve one’s goals. Nadia always dreamed of traveling the world and helping others along the way. At the young age of nine, Nadia moved from Turkey to Germany where she attended elementary and high school. Upon graduating, she spent the next three years discovering how to bring her dreams into fruition. She desired to live a life of service, which meant giving back like the people she admired most, timeless inspirations like Gandhi, Mother Teresa and BKS Iyengar. When Nadia was twenty years old, she left her home and family in search of herself and traveled to North America. In 1990, she moved to Santa Cruz, California. It was at this time, she attended her first Hatha Yoga class. “I had discovered a sacred space- one that would bring me peace of mind and conditioning of the body to realize optimal health.” Her first class changed her life; she knew this was something she wanted to integrate into her everyday life.

In 1992, Nadia moved to Maui. Upon arriving, she developed her surf skills feeling an instant oneness with the ocean. She had already incorporated healthy eating into her life by becoming a vegetarian at the age of fifteen, and now she made a conscious decision to have a more active lifestyle. She continued to practice yoga and surf.

In 1994, she returned to santa cruz, california to begin seriously studying her yoga practice. She embarked upon her spiritual journey attending several different styles of yoga classes. For two years she absorbed as much information as she could on the path to Yogini. She later made her way to study with Yoga Master Sri K Pattabhi Jois and also with Chuck Miller and Maty Ezraty at YogaWorks in Los Angeles. In Santa Cruz she studied Iyengar yoga with Kofi Busia.

In 1996, Maui, Hawaii, was calling Nadia back. She knew she needed and wanted to continue yoga. She opened her first yoga studio in Kuau on the Northshore of the island. She began offering Maui Aloha Yoga- a combination of Ashtanga and alignment-based yoga. As her clientele grew, she wanted to expand. In 2010, she moved her studio, Maui Yoga and Dance Shala, into the Old Train Depot in Paia, Maui.

As a business woman, Nadia made strategic efforts to grow her studio in order to spread the joy of yoga. She began offering yoga teacher trainings. She wanted to bring people together in the spirit of service and to help lead others to healthier lifestyles. By offering teacher trainings, she felt this was a wonderful way to assist locals and travellers through the transformative effects of yoga- what BKS Iyengar called “the global art.”In May 2014, Maui Yoga Shala expanded, opening its second location in Wailea, Hawaii. It was the first yoga and dance studio on the Southside of Maui. As for future endeavors, Nadia Toraman plans to continue a life of service, helping others find their own harmony through yoga.

PRIVATE CLASSESIndividual or group, Nadia has had the pleasure of teaching Yoga for over 20 years. She has studied Iyengar Yoga with Kofi Busia in Santa Cruz, California. She has also studied with Chuck Miller and Maty Ezraty at YogaWorks (Los Angeles), and with Yoga Master Sri K Pattabhi Jois. Her focus is bringing peace, harmony, and fitness into the lives of anyone willing to learn. She customizes the yoga lesson to fit your personal needs with your goals in mind. She is available for one-on-one or group sessions.

Locally & abroad I would love the opportunity to share some of the yoga knowledge and techniques I have learned throughout the years. I like meeting new people and studying different cultures. Being able to do what I love has brought me much joy. I have worked with some of the best yogis in the world. I can design a workshop specifically for your group. My speciality is Maui Aloha Yoga, which is my own blend of Alignment-Based Yoga with a healthy dose of Hawaii Aloha Spirit.

With years of experience managing my own successful business, I have the attention to detail, business knowledge, and “know- how” to bring practical ideas and tactics to your business. I offer consultations and advisory meetings to evaluate your business. Whether you are just starting up or established, new ideas and perspective can help increase your clientele. I am available for Skype/FaceTime or Phone Consultation, but prefer to travel to your business to give a more detailed assessment.

On this spiritual journey, I have found helping others to be my calling. Life coaching entails guiding and mentoring others with positive words and actions, and teaching healthy living – mentally, physically, and spiritually. If you would like personal growth and change, a life coach can help you achieve this.

Your teaching style is incredible! Your Mana is powerful yet graceful and very nurturing. Your guidance clear, focused. Hands on adjustments are gentle and easy to understand and feel. I love your classes and am so incredibly grateful that my path has led me here to Maui Yoga Shala. I always feel like I just received a big warm hug from my mom after your classes, and she’s been gone for 35 years! I am blessed to call you my teacher. Thank you for doing what you do and for being wonderful, beautiful you!